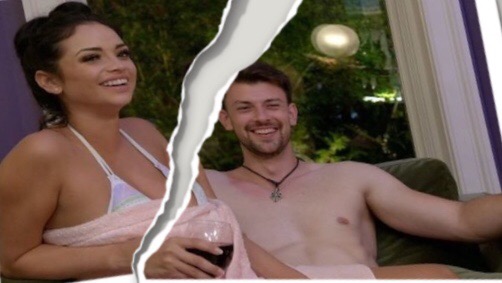 We’ve already seen plenty of couples marking their territory in the first two weeks of AYTO. Whether it’s Keyana and Michael, Malcolm and Diandra/Nurys, or Clinton and Jada/Uche. However, one couple, from the beginning, stood out to me as having the best chance to be a Perfect Match — Geles and Anthony. Unfortunately, that’s probably not true.

The last episode ended with a cliffhanger as Anthony and Geles made their way to the Truth Booth leaving us all wondering what the result may be. Well, Geles tweeted a GIF (then deleted the tweet) that I completely forgot about from a preseason promo which leads me to believe that they are NOT a Perfect Match.

Just connecting dots here, but this scene has not taken place yet. Maybe it took place at the Honeymoon Suite? Let’s face it, the only footage ever shown from the Honeymoon Suite is nothing but sunshine and rainbows. So, I doubt it. Either Geles and Anthony are a No Match and are returning to the house, or production decided to not air this scene — and I have to think that production would not let a drink being thrown in someone’s face slip through the cracks.

If you had a GIF of Geles throwing a drink in Anthony’s face as the first spoiler of the season, step up and collect your prize.

2 thoughts on “Geles And Anthony Are NOT A Perfect Match”