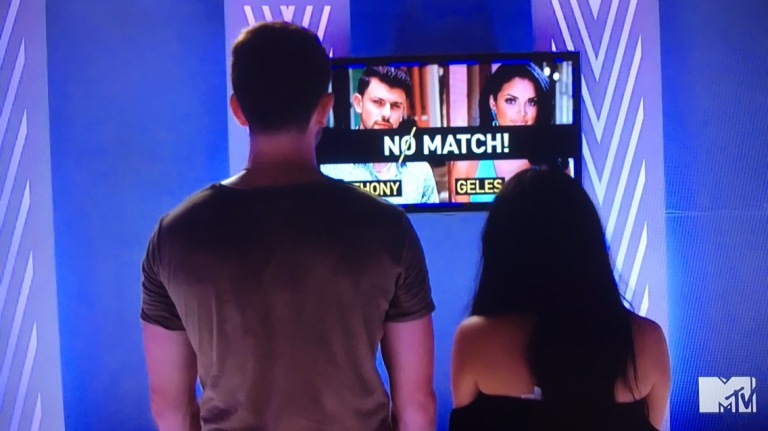 Surprise, surprise. Geles and Anthony are NOT a Perfect Match. Has anyone checked on Tyler lately? Bold move betting your life on two people, who have literally only known each other for like a week, to be a Perfect Match. Maybe next time aim a little lower, like your off-hand pinky. What the hell do you need that for anyway?

Michael took home the title “Asshole of the Episode” this week by making Keyana cry, multiple times. It wasn’t why he did it, it was how he did it.

Look, I get it, things were moving too fast and Michael decided that he finally wanted to play the game. But why lead Keyana on as hard as he did? If their relationship were in the real world, they would’ve been that annoying couple that drove everyone insane with all of their mushy Facebook post about each other. But now, out of the blue, Michael wants to play the game? For sure, “Asshole of the Episode.”

Speaking of bold moves, things are starting to heat up between Kareem and Alivia. Even after he pretty much called her fat.

Kareem: “Not me. I like more cushion for the pushin’.”

Michael, who recently decided to play AYTO, thought it would be a good idea to tell Alivia that he does not think her and Kareem were a Perfect Match. Backfire. Alivia ran and told Kareem about her and Michael’s conversation, and shit hit the fan. Kareem went ballistic on Michael calling him a “snake” and Michael, who is 2x the size of Kareem, just sat there and took it.

I know, it may feel like I’m dragging Michael a lot in this blog, but when you’re the “Asshole of the Episode,” that kind of goes hand in hand.

Alexis picks Keith – Keith seems to be more into Zoe at this point, but this is a match made in redneck heaven. Just let it happen.

Uche picks Clinton – Beacuse why not? Look at him.

Zoe picks Tyler – Clearly a second choice for Zoe seeing that she is much more into Keith. Live look at Tyler trying to get out of the friend zone:

Keyana picks Michael – “I’m going to do a complete 180 this week, Michael is my Perfect Match.” Keyana trying to figure out what a 180 is:

Nicole picks Dimitri – My man, Dimitri, has gotten so little air time that I almost forgot he was on the show.

Diandra picks Anthony – Has there ever been two trophies awarded to two 2nd place finishers? Diandra wants Malcolm, Anthony wants Geles. I’m sure neither are happy with their consolation prize.

Audrey picks Joe – Don’t think this is a Perfect Match, but Audrey looked at her options (Joe & Shad) and saw that it was a no brainer. Sit next to Joe during the ceremony, or spend a few hours listening to Shad talk about his jawline?

Geles picks Shad – Fresh off of her confirmed No-Match with Anthony, Geles announces that she thinks Emoney might be her Perfect Match. Emoney is too excited to be in a “love triangle” with Geles and Jada:

Terrence J announces to the house that they will be having a BBQ, but it won’t be all sunshine and shotgunning beers. Each couple had what looked like a pterodactyl egg that they had to keep safe as long as they could. The final three couples that kept their eggs safe the longest won spots on the date.

Let me just start this off by saying, the Season 6 cast got absolutely screwed! Seasons 1-5 all took place at some tropical island resort in either Hawaii, Puerto Rico, or the Dominican Republic where each date consisted of a beautiful, scenic view. Meanwhile, Season 6 got tucked away in Louisiana where they found themselves hanging out with the cast of Swamp People and feeding alligators for their dates.

Nonetheless, the group suffered through their bayou adventure.

The house voted to send Nurys and Malcolm into the Truth Booth and AYTO left us with another cliffhanger. When will it ever end!? Will Malcolm and Nurys be a Perfect Match? Or will Diandra get a second chance at rekindling her and Malcolm’s flame? Find out next Wednesday at 10/9c.