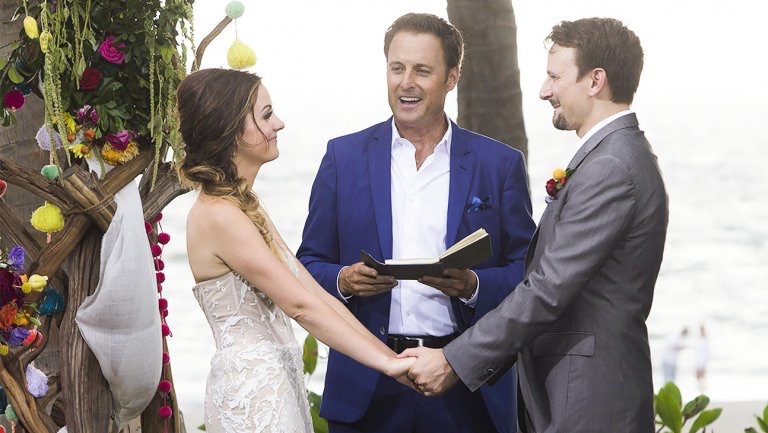 Tonight’s episode of Bachelor In Paradise kicked off with a wedding to remember. Carly and Evan got married in a wonderfully fun and heartfelt ceremony, but not before reminiscing on their awkward start on last season of the Bachelor In Paradise where Carly was not interested at all. It was so amazing to see how things have changed and how in love they were and Bachelor Nation wishes them all the best.

And then back to show..

It is safe to say that all fans are so glad that the “misconduct” that wasn’t found didn’t ruin this season. So to “restart the season” the cast sits down with Chris Harrison and the cast all agrees with the findings and trust ABC and the cast. It also appears the cast sides with DeMario for the most part. They also agree that race played a part in it.

During the down production time some couples communicated and stayed strong (Dean & Kristina, Derek & Taylor) while Amanda no longer wants to give Alex her rose.

Jasmine and Alex are both being a little clingy and aggressive in going after who they like.

Even after getting advice to move on and back down, Alex doesn’t do it and goes strong after Amanda, which she clearly isn’t into. However, in my opinion Amanda is too nice and doesn’t make her feelings known and kind of leads Alex on. Jasmine seems to be much more interested in Matt than he is into her.

Derek gets a date card and obviously asks Taylor. I think it would have been better given to someone else, but what do I know. They went to dinner and made out a lot? which they could have done at the house. They ended their date spending the night together back at the house.

Trouble with Dean and Kristina arise because he struggles to communicate. Kristina’s values good communication and is worried Dean will show interest in new people next week. When Dean does communicate its vague and that he doesn’t feel good about anything, which leaves Kristina in tears.

Of course ABC leaves us wanting more showing us the preview for the season which is full off steamy make outs, tears and anything else you could find in a dictionary under good television.

Tune in next Monday at 8 to finally see who gets a rose and who doesn’t.